The nations largest chicken chain told USA Today that they will open several Chick-Fil-A stores in New York City by the end of the year.

While there is only one Chick-Fil-A in New York and its housed in a NYU residence hall, Woody Faulk, Chick-fil-A vice president of design and innovation, told USA Today on April 8 that the company will open 108 restaurants by the end of the year, several of them in New York City.

"If we can't do it in New York, we have no business going anywhere else," said Faulk.

However, many New Yorkers still hold a grudge about the comments made by the Atlanta-based companys president, Dan Cathy.

Two years ago, Dan Cathy made the following statement in an interview with the Baptist Press:

"We are very much supportive of the family -- the biblical definition of the family unit. We are a family-owned business, a family-led business, and we are married to our first wives. We give God thanks for that...we know that it might not be popular with everyone, but thank the Lord, we live in a country where we can share our values and operate on biblical principles."

When the U.S. Supreme Court killed the Defense of Marriage Act in July 2013, Chick-fil-A president Dan Cathy tweeted that it was a "Sad day for our nation." Only two years earlier, gay marriage became legal in New York state.

As president and chief operating officer of Chick-fil-A, Cathy  who is an active member of New Hope Baptist Church in Fayetteville, Ga. - leads a business with over 1600 restaurants that have an average of $4 billion dollars in annual sales. They sell chicken and train employees to focus on values rooted in the Bible.

His father, S. Truett Cathy started the business in 1946 and made every effort to promote values like closing on Sundays so that employees could spend a day with their families or in worship.

When gay rights groups staged events in 2012 like the Chick-Fil-A boycott and Gay Kiss-in Day, restaurant proponents answered with Chick-Fil-A Appreciation Day and employees responded by giving water away to thirsty outdoor protesters.

The result was a sales bonanza for Chick-Fil-A that summer.

But, will New York with support statewide for gay marriage is at 60 percent, be as welcoming?

While mayors of culturally-similar cities Boston and San Francisco denounced the company in 2012, then-NYC Mayor Michael Bloomberg, said that it wasn't his or the government's place to comment on a private company's values. But Christine Quinn, who was at the time Speaker of the City Council and aiming for mayor herself, downed Chick-fil-A, and even suggested the lone NYU location pack its bags. 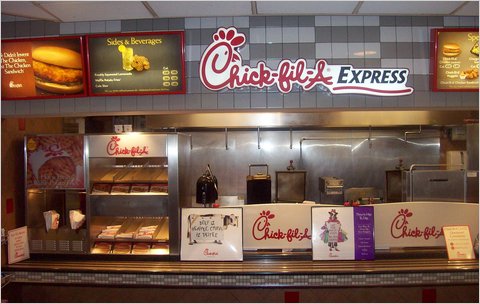 But does the average customer weigh politics in their fast food decision-making?

According to the 76 Yelp.com reviews online about Chick-fil-A on NYUs campus, the answer is no. The average rating for the Express location, which serves a reduced menu of nuggets, original sandwiches and waffle fries, is 3.5 out of 5 stars.

Putting everything else aside Chick Fil-A is f*#&ing delicious and although this particular location is a Chick Fil-A Express it is just as good as any other. They only have two options for you to choose from here an 8 piece chicken nuggets or a chicken sandwich. And no Chick Fil-A meal is complete without their tasty waffle fries or their famous Chick Fil-A sauce, wrote Zach P. of Stuyvesant Town.