Triple Faith House of Worship being Built in Germany
June 26, 2014  By Tiffani Knowles 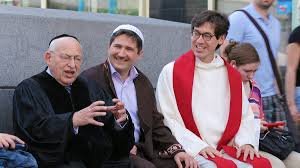 The big three Abrahamic faiths will soon worship under one roof in a new German architectural project called The House of One.

A group of Christians, Muslims and Jews is trying to crowdsource funds to build a place where they can all worship, claiming to become the world's first building to combine a church, a synagogue and a mosque under one roof.

The competition to design such a project was won by the local firm Kuehn Malvezzi in 2012. Their proposal was for a modernist structure in which the three religions could pray in three separate rooms. An additional room with a 32m-high domed roof will host regular discussions and meetings between the three communities.

It is to occupy a prominent site - Petriplatz - in the heart of Berlin.

According to one of the three religious leaders involved, Rabbi Tovia Ben Chorin, it is a perfect statement of reparation and redemption to the nation and the world.

"From my Jewish point of view the city where Jewish suffering was planned is now the city where a centre is being built by the three monotheistic religions which shaped European culture," he told the BBC.

The imam involved, Kadir Sanci, sees the House of One as "a sign, a signal to the world that the great majority of Muslims are peaceful and not violent.

Each of the three areas in the House of One will be the same size, but of a different shape.

Anyone can purchase a symbolic brick for €10 a piece via the House of One website. The initiative hopes to gather €43.5m euros by the start of 2016  three weeks after its launch, 378 individuals have donated €18,700. 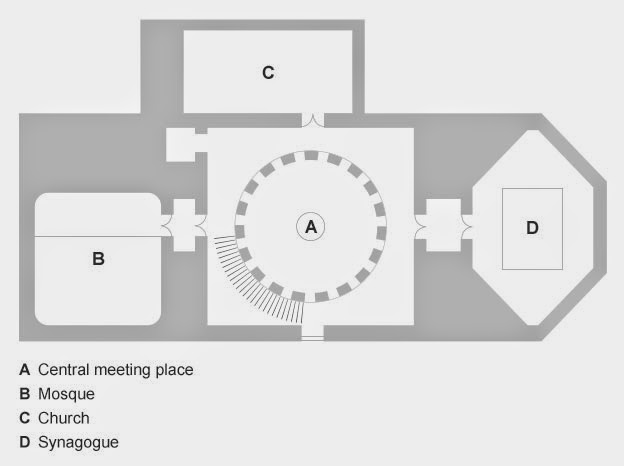 Incorporating lots of smaller investors in a crowdfunding campaign rather than funding it by one big donor creates an instant community of people interested in inter-faith dialogue.

Some claim the idea of multi-purpose religious spaces isn't as novel as it claims to be, however.

According to the Guardian, mosques in southern Spain became cathedrals after the Christian conquest. In Turkey, churches became mosques. In Britain, old Welsh chapels have become mosques as areas changed.

Still this space may be the first where all religions worship concurrently.

Next up, the Tri-Faith initiative in Omaha, Nebraska, aims to construct a campus for three religions by 2015.