The dictionary defines a stereotype as a widely held, but fixed oversimplified image or idea of a particular person, place or thing.

Human beings are susceptible to believe anything if it's said loudly enough and long enough.

Yes, you can fool some of the people all the time. The pure truth is sometimes inconvenient, uncomfortable and unacceptable because it interferes with and challenges our prejudices. Therefore, there is no need to seek further clarification because your deeply cherished tenets and like voices confirm that that is the way it iscase closed.

The question of immigration is no different.

The following is excerpted from articles about welfare abuse among Cuban immigrants published in the Fort Lauderdale Sun Sentinel:

Virtually by setting foot on U. S. soil they automatically qualify for benefits available to U. S. citizens, and can grab aid that almost all other immigrants must wait at least five years to claim and which under law is barred to illegal immigrants.

Secondly, this issue stands our immigration policy on its head, immigrants, legal or not, have long been demonized as layabouts who seek to fleece a welfare system that in reality they stood little chance of cracking.

Statistics, I hasten to remind you, whether positive or negative, emanating from a conservative or liberal voice, can be skewered to reflect the belief and conviction of the statistician and the audience he is endeavoring to reach.

Honest, objective statisticians always mention a disclaimer at the end of his or her report that there is a margin of error of 2 or 3 percent.

In a world of 7 billion people, that is a whole heap of faces.

Throughout my new book, Hola America: Guts, Grit, Grind and Further Traits in the Successful American Immigrant, I will reiterate time and again that people, for better or worse, are just people.

You cannot define or determine the nature, character or destiny of a person based on what he or she looks like or where he or she comes from.

Life is complicated and, when reality confronts you along the highway of living, you must adjust your thinking. On the road of life, there are exit signs and sometimes you have to turn completely around to arrive at the correct desired destination.

Donald Trump said after the San Bernardino massacre that we should suspend all Muslim immigration. Yet, he has business interests in Dubai and the Middle East and a significant portion of his wealth income is generated in that region.

Therefore, like he has said about the exception for Sadiq Khan, the recently elected mayor of London, it stands to reason he would make concessions for his people there.

If he builds a wall to prevent Mexican immigration he would have to make exceptions for people like Alfonso Pacheco, co-founder of food tech start-up MADE, who was featured in my book, and Diego Reyna, Mexican construction worker whose Mexican immigrant colleagues built Trump International Hotel & Tower Vancouver from the concrete pouring to the wood forming.

If he deports all 11 million illegal immigrants he would have to make exceptions for the avocado farmers in California and the strawberry pickers and orange harvesters in Florida. Otherwise, our produce industry would tank.

Yes, I know that we will never convince some of you that the present-day, third-world immigrant is not a blood-sucking welfare cheat and layabout, a pest who has invaded your land to drain you dry, rape your daughters and eventually kill you off.

However, if you are not hopelessly obstinate and unshakeable in your approach to life, you will discover as time passes, you must abandon certain longtime cherished beliefs and suspend what you formerly considered to be true and factual.

In fact, the purpose of our book was not to convince you of anything. You have the right to accept or reject any thing we say in this book.

It is only an attempt to put a human face to the cold, faceless statistic of immigration, to allow you a glimpse of what a man or woman would endure to achieve a goal.

It is our hope that you would learn something about the human character, and somebodys spirit would be encouraged and uplifted.

For those of you on the other side of the immigration equation who see no redeeming value in these worthless, law-breaking invaders and criminals, we hope that you would not be so quick to condemn and judge them so harshly the next time you encounter one of them.

We would hope that you would say, What would I do if I found myself in those same shoes?

So, on that note I introduce Beverly Gordon Hall.

Engaging her in conversation was like turning on a faucet of information and advice. 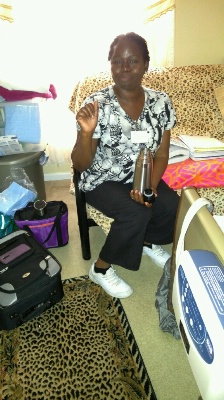 Within one hour of talking with her, some traits became readily apparent. They stood out like sentinels to victory, signposts to overcoming obstacles. They would ensure success for all human beings in general and the new immigrant, in particular.

They are empathy, confidence, independence, faith, courage and daring and lack of sulkiness.

I encountered her for the first time in her job as a Certified Nursing Assistant working in the Hospice field. She was the caregiver for the husband of my wifes cousin in the last stages of a terminal disease.

It is important to note here not many arrogant atheists, patient or caregiver, are involved in the hospice, palliative or end of life profession. When you are faced with the reality that you will never see another sunrise or watch your children grow upatheism, somehow, does not seem quite so alluring, attractive and intellectually astute.

Seeking hope and faith, you become like a drowning man grasping at a razor blade. You yearn for some measure of comfort and assurance that there is something good that will result from such an experience.

How do you like and do this kind of job? I asked her.

She responded, No problem, he is just a human being in need of care. The way I approach it is that I realize that someday I may be lying there, and I would want somebody to treat me with love, respect and dignity. I always say and remember, what goes around comes around.

To emphasize and illustrate her point, she related a story to me about a friend of hers who was terrified in caring for a dying AIDS patients.

She sat on the couch next to the patients bed, surrounded by books and reading material relevant to the nursing profession. She is on track to become an LPN with the ultimate goal of becoming a registered nurse.

I love to read, she said, responding to a statement I made about our book.

I will purchase a copy, she assured me.

How would you feel if we include you in the expanded version, I asked her nervously.

I would love it, was her quick reply.

That brief exchange showed me two basic characteristics for a successful human beingthe pursuit of knowledge and achievement and the desire to share it.

She is the oldest of her single mothers three children.

Her father did not support her mother and they were left alone to fend for themselves.

Her father had other light-skinned children and she, being darker-skinned, was neglected.

How did you overcome that, how did that make you feel, I enquired.

Her nonchalant response was, Child, please, I just did what I had to do to make life work for me.

She acquired her own clothing design company in her native land. Desiring to further herself, she moved to this country in 1999 at the behest of an uncle in Baltimore, Maryland.

She was undocumented with her two children from 1999 until she obtained her resident card in 2010. During this time, she somehow managed to pay for her childrens private schooling for a while, save $70,000 in the bank and purchase a car for $7,000 in cash.

She never sold drugs, never was on welfare and never laid on her back so a man would give her money for support.

She laughed when she recounted a story of a young man she admired in Baltimore,

He was the perfect male specimen, cut, muscular and tall. Handsome and outgoing, everything I wanted and desired in a man. I asked him one day, what do you do for a living? He said, I am on welfare.

The budding romance was summarily nipped in the bud.

With a look of incredulity on her face, she answered, What could I do with that? He could not take me where I needed to go.

If you would like to read about other spunky, remarkable persons, order a copy of our book for Kindle, iPad and any other mobile device.