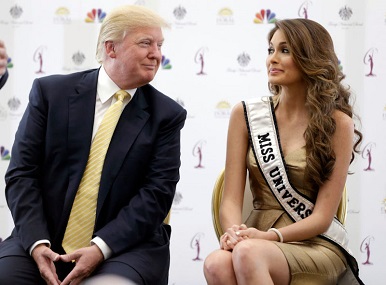 As his poll numbers are in a state of freefall proceeding the unearthing of a tape of him bragging about sexually assaulting women, Donald Trump is claiming that if he loses he will not be prepared to concede the election because it will be the result of a crooked, rigged system.

But, between Monday and today, one is not sure how he can maintain this stance.  This presidential hopeful has lost favor with women all over the country, being relegated to likes of Bill Cosby due to the testimonies of women who claim his words match his actions to a tee.

Women from as far back as 35 years to as recent as 2005 have accused Trump of harassment and assault, with women like Jessica Leeds coming forward to share how he fondled her breasts on a flight and attempted to reach under her skirt.

These harrowing allegations include but are not limited to: kissing a former Miss USA contestant twice without consent, kissing a receptionist at Trump Tower against her will, forcibly kissing a People Magazine writer, groping a woman at Mar-a-Lago, groping Miss Washington USA 2013, walking in on 1997 Miss Teen USA contestants while they were changing and groping Makeup Artist Jill Harth in 1997.

The sad thing is that any time Trump is cornered and caught in a lie, he will issue a perfunctory apology and proceed to blame the liberal media, crooked Hillary and Bill for his misfortunes.

It is never his fault. The reason why he ever did anything is because somebody started it, caused it or did exactly the same thing or worse.

Ironically, some Americans so abhor President Obama, Hillary Clinton, the Democratic party and its policies that they are willing to tolerate this guy. Friends, it is called "blind hatred" for a reason.

Here is a candidate, abandoned by members of his own party, without endorsement by any conservative leaning publication, save that of his own son-in-law, and people still want to elect him.

Evangelical Christians, unable to find scriptural support for such a candidate, dig deep within the pages of the Bible to find references about Cyrus and Pharaoh to show that God can use such a man.

This suggests that God is so inept that he can no longer find a Joseph, Daniel, John the Baptist, Deborah, Gideon or Joshua and has to resort to such a man to lead people to the Promised Land.

We have become so seduced by his presumed wealth and his oft stated claim that he alone will make "America great again," that we are willing to ignore certain troubling facts.

If Donald was worth about $60,000, would we even be paying attention to this guy? The Bible was right in declaring, "Money answereth all things."

This is a man who wants things done his way and if you cross him he will come back at you hard and fast with full intent to destroy you. His favorite Bible verse is "an eye for an eye."

He has no respect for the institution of marriage--being married three times- and no respect for women. His words on video and tape confirm this assertion.

He says that he is a changed man, people do make mistakes and that he has grown up and matured.

Yet, that same principle does not apply to Bill Clinton because he is still holding Hillary accountable for the actions of her wayward husband.

Here is an interesting observation. If he has changed, why is Roger Ailes, forced out of Fox News for sexual molestation among his cadre of advisers?

Rudy Giuliani, married three times, accused of infidelity with his "good friend, now present wife, while Mayor of New York and still married to Donna Hanover, is one of his staunchest supporters.

Giuliani states that Hillary - because of her past - is unfit to serve as President. Trump's business acumen is suspect because he has declared bankruptcy four times. Furthermore, those actions demonstrate a callous disregard for the welfare of the workers, tradesmen and businesses left holding the bag.

I think we deserve better, but it is what it is.

We must agree with Shakespeare-- "the fault, dear Brutus, lies not in our stars but in ourselves."

It is my hope that we do change, do not pass this way again or experience such a time as this again.

Visitor Comments (2)
Response to dfviewpoint
Posted By VINCEKNOWLES@ROCKETMAIL.COM on October 15, 2016
Yes, it is true God can change any heart.
But my point is God can also change the heart of Mrs. Clinton.
God is no respecter of persons.
Those leaning towards Mr. Trump always declare God can use any man to forward his agenda.
They use this statement as ointment for their consciences when they observe and recoil in horror
at his lifestyle.
That assumption has to include people who lean towards the democratic candidate, Mrs. Clinton.
If she is elected we are supposed to pray for her as well.
Mr. Trump has also stated that he has made mistakes and that he can mature change and grow
up.

As he continues to attack Hilary and Bill for their past mistakes, is he implying that they cannot and they are incapable of the same feat?
God can change any one.
Nevertheless, rest assured just in case you think that I am supporting one over the other, I have just received my mail in ballot and I am writing in my candidate for President.

I do not ascribe to this notion, the lesser of two evils.
Christians should shun the very appearance of evil.
"Another side" to our political dilemma
Posted By DFVIEWPOINTNEWD on October 14, 2016
Mr. Knowles,
I agree with a great deal of your comments on the dilemma we face in America with electing a suitable candidate as the next president of this great nation. Yet we part company when it comes to your viewpoint or conclusion that "Evangelical Christians unable to find scriptural support for such a candidate, dig deep within the pages of the Bible to find references about Cyrus and Pharaoh to show that God can use such a man. This suggests that God is so inept that he can no longer find a Joseph, Daniel, John the Baptist, Deborah, Gideon or Joshua and has to resort to such a man to lead people to the Promised Land."

God is sovereign and needs no counsel from any of us. The problem is God is a righteous and punishes His people for turning from Him in spite of repeated calls to repent and restore a right relationship. Romans 13:1-5 (NIV) suggests that God is the one who places people in power, whether good or bad, for His purpose. Psalms 75:6-7 support the same thought. Old Testament prophets like Jeremiah, Micah, Amos, Isaiah, Ezekiel warned their nation of impending judgment because of sins including being led from their countries as slaves to the nation of their captors. Similarly, our nation has rejected Jesus as Lord of this nation, and the Judeo-Christian values that framed our foundation as a nation.

The church of Jesus Christ has also lost its identity, behaving like untransformed people. It is time the church return to its role of salt and light in the society (Matthew 5:13-16). Christians are commanded to pray for those in authority (or going to be in authority in this case), regardless of party affiliations (I Tim 2:1-3). Further, II Chronicles 7:14 is a clear call for Christians ("God's people") to humble themselves, pray, repent, and seek God's favor for the healing of the nation.

Yes, God is not short that he is relegated to the choice of Mrs. Clinton or Mr. Trump. But He can certainly change any heart! He gave King Saul a new heart (I Samuel 10:9); allowed a donkey to correct a prophet (Numbers 22:25-33). Surely God can change any candidate's heart, if He the Potter so chooses! I humbly pray that we the church would engage in prayer and seek His wisdom to know how to vote, for voting we must and indeed, we are in a great dilemma! But lets not forget, voting is our civic duty - a right and a responsibility!
Post A Comment
Related Articles · More Articles
New Rule: Immigrants can receive healthcare and aid without risking green card eligibility
The public charge rule that rendered immigrants inadmissible or ineligible for green cards if they accept government assistance was overturned in September and new rule, allowing immigrants to receive food stamps, healthcare services and other government aid, took effect December 23, 2022.
Trumps Sad Farewell to all his Greatness
Trump is like an aging boxer well past his prime, who does not know when to quit. Yet, which political stands in the wings? I think we all know.
Understanding Systemic Racism as a Christian
Power facilitates access to money which maintains said power and influence over a society. This is the reason systemic racism exists in America. Can a believer understand this?