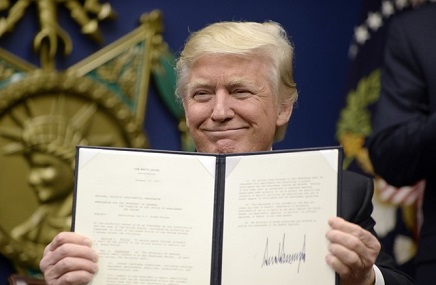 This was an excerpt from one of the executive orders proposed to President Trump by Andrew Bremberg on January 23. It was entitled Executive Order on Protecting Taxpayer Resources by Ensuring Our Immigration Laws Promote Accountability and Responsibility.

One of these reports prevents families from getting the child tax credit if the parents are unauthorized (even if the children are U.S. citizens), and it would prevent an unauthorized immigrant from being eligible for Social Security during the time he was unauthorized even if he was paying into the system.

Hmmm Everything works on paper.

There is a vast difference between saying or believing something and witnessing something being accomplished.

Perception, oftentimes, is greater than reality.

If I think it, then it must be real. A man convinced against his will is of the same opinion still.

Many of Trump's supporters firmly believe that immigrants are a financial drain on America, an unsightly blight on the social fabric of this country that should be summarily excised. We cannot move forward as a nation until we staunch this horrific bleeding caused by these invading hordes. We face looming disaster, an end of America as we have always known it, unless this ungodly situation is not corrected forthwith, they say.

A bit over the top you may be inclined to say.

Yet, hyperbole is the order of the day, in light of the carnage, according to Mr. Trump, left behind by President Obama.

This is draconian. It seeks to punish not only legal immigrants in the U.S. and their families, but also their US-citizen relatives. Its a reflection of a worldview in which any benefit an immigrant gets from the government is, in some way, a theft of American tax money  and punishes immigrants as thieves accordingly.

Trumps immigration brain trust, including Steve Bannon, Stephen Miller, and attorney general Jeff Sessions, have long been animated by the belief that immigrants are a drain on America  and their use of social services is one way to 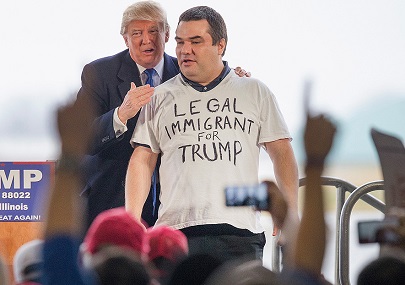 demonstrate that. Whether or not this particular executive order is signed, walling off the welfare state from immigrants in the US may well remain in the White House sights.)

After reading that and knowing nothing else, the next time you see an immigrant on the street you will be tempted to shout, "Get out, lazy freeloader and thief."

After all these guys with the gargantuan IQ like Stephen Miller (per Ann Coulter) and the business acumen of Donald Trump could not possibly be wrong.

If they said it, it must be gospel truth.

For those who believe all of the above, this column is not for you. It is not my job to convince anyone but only to offer some "alternative facts."

Over the course of my life, I have observed that many people who are "experts" on government benefits have never been in a welfare office, applied for assistance or tried to subsist on the dole.

Immigrants return far more to this country than they ever receive.

Let us examine the government handout from the perspective of the typical Cuban and Haitian refugee.

Here is a response from Nancy Jaramillo, a woman who I write about in my new book called HOLA America, about the benefits received by a Cuban refugee. Please note that in Miami, Fl. the Cuban is the only immigrant who receives government assistance immediately upon his arrival. Currently, that may be in the process of changing.

"We arrived in 1966. We received monthly benefits of a $100 for our family of four. We had health screenings at the Freedom Tower. We also received canned food from the Dept. Of Agriculture. One large cylindrical can of ham, a bag of rice, instant potatoes, butter and lard, can't remember anything else," she said.

Not exactly an avenue to wealth and prosperity, and certainly not stealing food from the mouths of deserving malnourished US citizens.

The Haitian refugee, if by some miracle he or she did manage to escape deportation (or the politically correct term-repatriation), did not receive any of the above. At this point, I would invite you take a drive with me to Miami, Fl along Calle Ocho. We will pass Sedano's Supermarket, Cafe Versailles, and La Carreta restaurants, while the sweet sounds of Mambo and the voice of Celia Cruz fills the air. We continue on to Hialeah and cruise past the Gus Machado Ford dealership on W. 49th Street.

The next day I would prevail upon you to travel from Biscayne Blvd west to North Miami Ave from 54th Street north to 79th Street in the neighborhood community, commonly called Little Haiti.

We will traverse the avenues and lanes of this area while the dulcid tones of Compas waft from the shop windows.

As the full expanse of what your eyes behold--you suddenly realize. Forget Anne Sullivan, the teacher of Helen Keller!

These people are the real miracle workers.

Forced by circumstances into an unknown land, with a strange culture and unfamiliar tongue, they not only survived, they thrived.

The story of these Pedro Pan Kids, Balseros and Boat People is nothing short of remarkable.

They parlayed such meager resources into institutions employing and serving hundreds and thousands of people.

Mr. Trump would be well advised to recruit them to his board of economic advisers.

Indeed a lot of them are diehard Republicans.

They are the epitome of the American ethic--pull yourself up by your own bootstraps.

As a human being and fellow immigrant, I am justifiably proud of what they have achieved.

They should be saluted not excoriated.

Based on the beliefs and assumptions of the average immigrant hard liner like Ann Coulter, all of these businesses, restaurants, doctor's offices, supermarkets came about because of, in the case of the average Cuban Refugee, a large can of ham, $100 a month, some rice, instant potatoes, butter and lard.

The average Haitian refugee, hailing from the poorest country in the western hemisphere, in more ways than one, did not even have that.

It is an insult to the human spirit to consider that there was no ingenuity, hard word, blood, sweat, tears and sacrifice involved in the equation, only that paltry government handout which came about at the expense of hard working native U.S. citizens.

A note to the forlorn single mother in the ghetto, anxiously awaiting the government windfall of investment in the inner cities. Yes, the one who is struggling to survive on the $500 in food stamps and the Section 8 voucher.

The bounty you are hoping to experience by squeezing and penalizing the immigrant may be a long time in coming.

Just remember the most terrifying words in the English language, I AM FROM THE GOVERNMENT AND I AM HERE TO HELP.

So, do not hold your breath.

Heed a warning from psychiatrists who are analyzing Trump from a safe distance.

Trump's psychological damage will, in short, create "the illusion that real Americans can only become winners if others become losers, which normalizes what therapists work against: the tendency to blame others in our lives for our personal fears and insecurities ... instead of taking the healthier but more difficult path of self-awareness and self-responsibility. It also normalizes a kind of hyper-masculinity. Simply stated, Trumpism is inconsistent with emotionally healthy living  and we have to say so publicly."

To my fellow immigrant, the one who has escaped from the darkness of his past to the shining beacon of hope that is yet still America, I close with this word from my upper room daily devotional.

Every day, we have choices about what messages we will believe: those that come from the world around us, or those from our God. When I feel as if the world is telling me, Youre a loser, a worthless failure. No one loves you, God counters, Youre my child and I love you unconditionally. Youre out of work and youre going to starve come the words of doubt. But God says, I will provide for you. When we hear, You have six months to live Jesus reminds us: In me, you have eternal life. When a voice within badgers us with, Your prodigal children are lost, God gives us hope: I can guide them home.

Even when we feel completely alone, the words of Jesus remind us we are loved: Surely, I am with you always (Matt. 28:20).

We have a choice. What promises will we believe: taunts that echo our doubts, or promises that come from the love of God?"