Why Trump Immigration Raids are Business as Usual
February 16, 2017  By V. Knowles 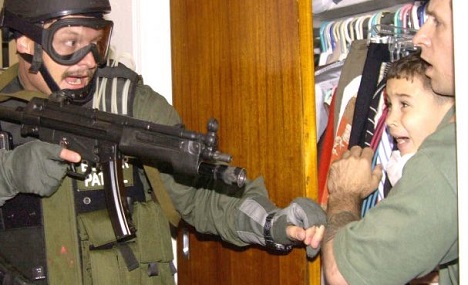 The most accurate description of the recent events relative to the immigration raids around the country came from the mouth of the U.S. Immigration and Customs Enforcement spokesman.

The press, in their ardor to demean Donald Trump, and Trump's claim that he was fulfilling a campaign promise were both wrong.

Their stances both show either a misunderstanding or a downright false description of the dynamics of immigration enforcement.

Look, if everybody would stop shouting past each other, sit down and listen, perhaps you may learn something from an immigrant who has lived on the front lines of the immigration problem for more than 30 years.

First of all, the primary job description of a border patrol/immigration enforcement officer is: the apprehension, detention and subsequent deportation of individuals who are unauthorized to be legally in this country.

This job is not confined solely to points of entry like seaports or airports.

An immigration official has the power to arrest and detain wherever and whenever he encounters an illegal immigrant.

He can do it even in a house of worship, even though because of bad publicity and press, he or she refrains from doing it.

Anyone in this country who is not a U.S. citizen is required by law to show proof at any time that he or she is legally entitled to be here. If you cannot, you may be arrested and sent to some immigration facility to be processed for deportation. That is the law. Point bank.

Often times it may not happen, but an officer who does so is not doing anything wrong or out of order.

Case in point. I was employed at Greyhound Bus Lines in Miami. I was a permanent resident at the time. I was the manager of the bus station and was approached by a border patrol agent to produce my green card. I, of course, produced same and the incident was closed.

Lest you may be tempted to say, I was black and that kind of treatment should be expected, I refer you to an incident involving a friend of mine.

Gisela was a tall, statuesque Nordic woman. She was blonde and had blue eyes. She was stopped on Biscayne Boulevard in Miami by a border patrol agent who heard her accent. She did not have her green card but she was about two blocks from her home.

Fortunately, the agent was considerate enough to follow her home so she could show him same. I must emphasize that the law did not and still does not require him to do so. Without any more discussion or explanation, he was entirely in his rights to transport her directly to Miamis Krome Detention Center.

Upon arrival at her home, Giselas irate husband produced the necessary document while berating the agent for his supposed insult and indiscretion.

The agent calmly replied, "Sir, I am only doing my job."

Immigration enforcement can also be one on one or, as this past weekend showed, can occur in the form of raids.

Frankly, ICE does not set policy according to the press or who sits in the White House.

Think of the incident of little Elian Gonzalez in Miami who was held at gunpoint. Ask some Cubans who are still seething over that pre-dawn raid in Little Havana. My wife remembers it well. She had a devil of a time getting to and from work at Coral Way Elementary due to the ensuing demonstrations and uproar following that immigration action.

You or I may not like what the immigration officer does, but in the final analysis he or she is only doing his or her job.