He was oppressed and he was afflicted, yet he opened not his mouth. - Isaiah 53:7 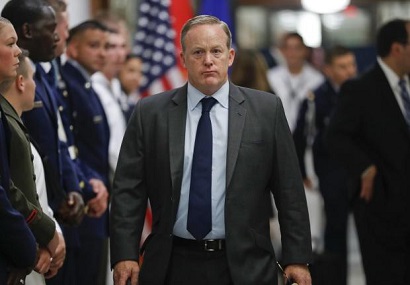 Sean Spicer called it quits. As the face of the administration, he obviously wasnt built for the battle long term. Being assaulted on a daily basis with the hypocrisy of his commander-in-chief and the continual change of positions became too much to bear. Can you blame him, though? Any self-respecting individual would have a tough time with such a charge.

Truth. Men of great authority do not become involved in street brawls. Men of influence and power do not have time for petty insignificant squabbles. I guess Spicer was tired of the brawl.

When you ascend the ladder of success, there will always be detractors and critics. However, great men learn to ignore them and realize that it comes with the territory.

Many have stated that he is now a born-again Christian. But, Donald Trump is also president of the United States. There is an expectation of a certain type of conduct for the occupant of the office.

He is new to the position" or "he is not the politically correct type" are lame excuses that Spicer actually had to retort.

Yet, good, mature behavior is not an unreasonable expectation in such a high position. Spicer finally realizes this which is why his resignation today has not come as much of a surprise.

Even people of his same political party have said as much.

How could Spicer effectively defend a man who could tweet the following:

"Heard poorly rated @Morning_Joe speaks badly of me (don't watch anymore). Then how come low I.Q. Crazy Mika, along with Psycho Joe, cam..to Mar-a-Lago 3 nights in a row around New Year's Eve, and insisted on joining me. She was bleeding badly from a face-lift. I said no! -8:58 AM - 29 Jun 2017

Ask yourself, would you be comfortable with your pastor, priest or principal reacting to criticism in such a manner?

Would you endorse, support or justify such a response in any person of authority and influence?

The bar for leaders in any field of endeavor is much higher than the average Joe, no pun intended.

There is no way you, I or Spicer could justify a leader responding in this fashion, unless 1) you are deathly afraid of him or her, 2) you feel exactly like him or her or 3) or you are a hypocrite.

Spicer, an avowed Catholic, bowed out for fear of the aforementioned labels.

She stated in a recent press briefing that no one should be expected to endure constant criticism and not fight back. The American people, she continued, elected a fighter. She, perhaps, hasnt yet figured it out.

The following exchange demonstrates why Christianity is so lightly regarded in many circles nowadays--the professors and practitioners of the faith do not possess the level of commitment to live out the tenets of said faith. 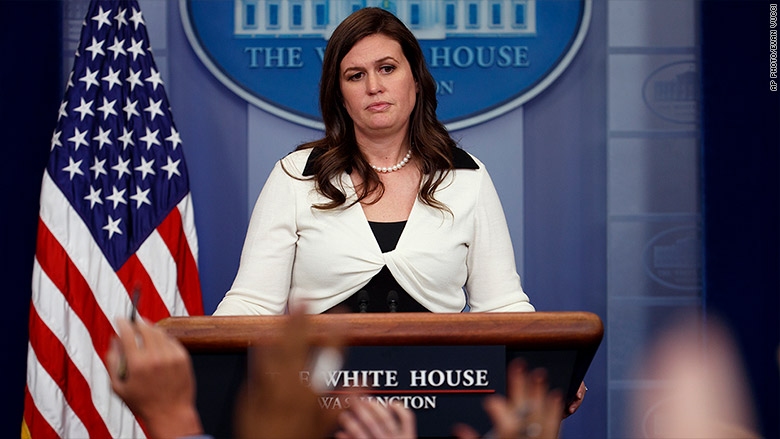 One reporter, pointing out that Sanders has frequently spoken about her family at the briefing room podium, asked how she would explain the presidents behavior to her young children.

As a person of faith, I think we all have one perfect role model, Sanders responded.Thats where I tell my kids to look. None of us are perfect, certainly there is only one that is and I would point in that direction.

Isn't that always the fall back position? Their two favorite verses in the BibleThere is none perfect, no not one, and judge not lest ye be judged.

They always run for cover under these two statements to justify wrongdoing and silence criticism.

Yet we wear bracelets and don T- shirts that proudly shout "what would Jesus do."

Conveniently, we forget that Jesus himself instructed his disciples, his followers, any subscriber to the Christian ethos, be ye perfect even as your father in heaven is perfect.

By your fruits ye shall know them. A good tree cannot bear bad fruit.

Be ye holy because I am holy.

Deny yourself and take up your cross daily and follow me.

Rejoice and be exceedingly glad when men revile you and say all manner of evil things about you.

We are instructed to bless and not curse.

If a man compels you to go one mile, go with him twain.

If someone sues you at the law to take your coat, give him your cloak as well.

We are mandated to turn the other cheek towards our abuser if he smites us on one cheek.

Now close your eyes for a moment. Can you imagine Donald exhibiting even one of the above characteristics?

There is no Christian anywhere that can ethically maintain that our behavior should be the same as the world.

There is always an expectation of an evidently changing lifestyle. On this journey, we must be observed not lashing out at every perceived slight. There must be some demonstration that one is growing in grace.

Yet, Sarah Huckabee Sanders, whose father is Baptist minister, can stand in front of an audience of reporters and justify a man, president of the United States, whose modus operandi should be the epitome of decorum and dignity, tweeting such bile.

I am sure her generous consideration and allowance of bad behavior would not extend to the previous occupant of the White House. History has taught us that, for some Democrats or Republicans, strict adherence to Christian ethics is dependent on political affiliation and if your man is in power at the time. Not big believers in "preach the word be instant in season and out" are these guys.

Recently, we have seen images of Trump assaulting a man with the CNN logo instead of a head in a mock wrestling match.

For God's sake, we are not children on a playground. This is not tit for tat, butter for fat, you kill my dog, I will kill your cat.

He is not a gang-banger in the South Bronx who must "off" that dude who just dissed him. He is president of the United States, the leader of the free world and all eyes are upon him.

It seems that a grotesque personality is so deeply ingrained in Donald's pysche that he has descended into a reprobate mindset. In this frame of mind it is difficult for the grace and mercy of God to dwell therein. In addition, he appears to always feel persecuted , under attack and really undeserving of criticism. With a pugnacious personality who can longer control his impulses, he viciously retaliates at the slightest insult.

Indeed, he has declared his favorite Bible verse is an eye for an eye, a tooth for a tooth.

I am thoroughly dismayed for all of us as a nation.

Finally, it is a shame that when Mike Huckabee was teaching his daughter the principles of Christianity, that he did not warn her that it is vitally important that she should display them as well.

Perhaps it may be a good idea to review the intent for all of us Christians the essence of the following Biblical passage:

Now who will harm you if you are eager to do what is good?

But even if you do suffer for doing what is right, you are blessed. Do not fear what they fear, and do not be intimidated, but in your hearts sanctify Christ as Lord. Always be ready to make your defense to anyone who demands from you an accounting for the hope that is in you; yet do it with gentleness and reverence. Keep your conscience clear, so that, when you are maligned, those who abuse you for your good conduct in Christ may be put to shame. - 1 Peter 3:13-16