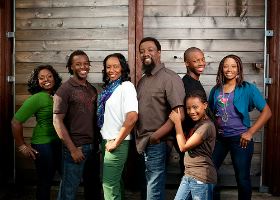 forever JONES is a Christian gospel group formed by husband and wife DeWitt and Kim Jones and their five children. Forever Jones was then formed with their five children: D'Jeniele, DeWitt, Judah, Dominique, and Mya Joy Grace. The Jones family's manager and friend was singer/producer Jeoffrey Benward. He then introduced them to writer/producer Tommy Sims, who agreed to produce their debut album. The album Get Ready was released on 2010 receiving favorable critics.


The family currently lives in Shreveport, Louisiana where they minister at the Shreveport Community Church.


Dominique and DeWitt Jr. were featured on our program Always and forever JONES that aired on May 8, 2011
Back To Interviewed Guests