Monica Ellis was born in Detroit, Michigan to parents working at the Chysler Plant. Her parents moved to Miami when she was in the 7th grade where she was raised until she was 17. After her parents uprooted her from Miami Central Senior High School in 1991, they moved to Memphis, TN. where she went to Westwood High School for her 12th grade year. At the age of 22, she had a son and, when he was 3 years old, they moved to Atlanta, GA. She met and married a Caucasian man. She now has two children. 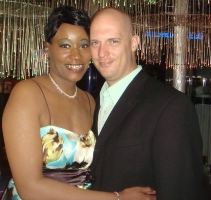 In 2009, she started the journey of writing her memoir of how she lives with the disease Lupus and in March of 2011 she released her first book: Some People Kill Me, Living MY Life w/Lupus. The Memoirs of a Lupus Survivor.

Monica Ellis and her husband Tony were featured on our Love 101: Interracial Love program which aired on Feb 26, 2012.