Just Thinking: Why Forgiving Your Oppressor can Never be Weakness
November 9, 2020  By V. Knowles

I read this column as a black man and a black father while visions of George Floyd crying out for his mama and a disfigured corpse of Emmett Till, lying still in his casket, dance around in my head.

Every bone in my body, every vessel in my heart, every part of my soul cry out to endorse everything I have just read.

I thoroughly understand it is beyond human capability to forgive people who have committed egregious acts against you, who also engaged in a protracted effort to deny your basic humanity. They were people who questioned your legitimacy to occupy or aspire to certain offices. We acutely remember the long standing "birtherism" claims. Indeed some still hold on to that long ago debunked belief.

I am asking myself, are they deserving of such a generous, altruistic gesture? History has shown us that we - the victims- are always being asked to give way and extend the hand of compassion, while those now on the wrong side of the equation never exhibit the same kindness when they are on top.

It is so natural, so human, so reasonable, so deliciously tempting to return back in spades, that which you received.

Indeed that is the attitude of the politicians these people support. 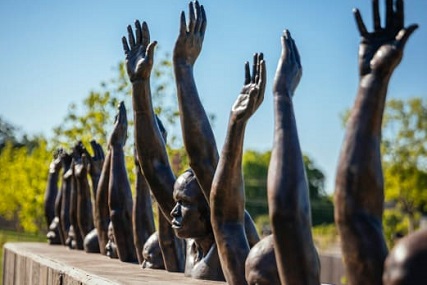 They firmly believe in an eye for an eye and that people who take it on the chin without fighting back are losers and suckers.

To reach out and forgive an oppressor is a stupid, unreasonable idea reserved for weak people.

How do you connect with people who sincerely believe even now, and are threatening lawsuits claiming that they were cheated, that the election was stolen from their candidate by "Deep State" operatives using an ultra secret CIA computer called Hammer and Claw?

He has commanded me to forgive, not seven times, which in itself an unheard of, absurd notion  not humanly possible or practical but seventy times seven. Moreover He has warned me that if I do not forgive men their trespasses, He will not forgive mine.

That tooth for tooth business is definitely more appealing.

Who can and should do that?

The annoying, simple answer is I should.

It does not matter if Trump and his supporters do not reach out, I am obligated to do so whether I like it or not. Furthermore, at the risk of sounding unduly harsh, my opinion, feeling, pain, hurt or emotion or those of Mr. Pitts and the supporters of Mr. Trump have no bearing on this transaction.

He is the one who loved me and gave his life for me, when I did not deserve it or demonstrated that I merited any kind of compassion or consideration.

That kind of love and sacrifice constrains me and prevents me from doing anything that shows disregard for such devotion and commitment.

It is my prayer that Mr. Pitts, Mr. Trump and his supporters will someday arrive at the same conclusion.

Nevertheless, if they do not, I will not be deterred, because in the final analysis, it is a matter between He and I.