The Seahawks-Broncos Upset: Is Prayer The Culprit?
February 5, 2014  By Tiffani Knowles 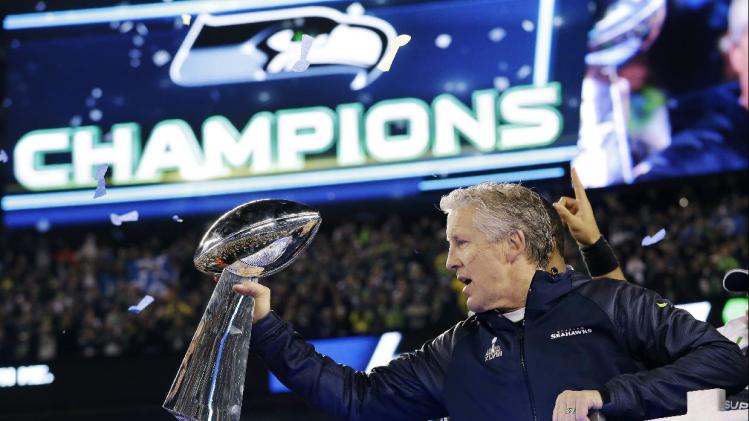 The Seattle Seahawks' Super Bowl win was a shock to many.

1.       Their city has seemed to be cursed for the past decade when it comes to professional sports. And their weather may have something to do with it.

2.       Seattle ranks as one of Americas most secular city based on a Barna Study in 2013, precisely labeled as #13 on the Post-Christian list. So, Gods favor didnt seem likely.

3.       Their quarterback is practically post-adolescent at 25 years old and he went up against the leagues greatest quarterback Peyton Manning.

And yet, while everyones jaw was on the ground and their hands were clutching their heads, the Seahawks would sweep the board for a 43-8 victory over one of the classiest NFL teams the Denver Broncos.

So, how exactly did this young, hungry, zealous team completely dwarf a team that has suffered only six losing seasons in 35 years, have won seven AFC Championships and two Super Bowls, and have four players in the Pro Football Hall of Fame?

Well, there are some theories floating around the blogosphere. Well, really just one theory.

According to avid sports fan David Thomas, he stated the obvious on his Facebook page during the game:

The Seahawks are NOT THIS GOOD!
This makes me think that there's got to be some prayer warriors on this team. Which of them knows The Lord? Because this looks like Unmerited Favor!

And, he was right.

According to The Blaze.com's columnist Billy Hallowell in October, Seahawks quarterback Russell Wilson had been leading this team from a personal prayer altar.

Hallowell cites the new football film The Making of a Champion, in which the NFL player says he was 14 years old when Jesus Christ appeared to him in a dream and told him to learn more about the faith.

I had a dream one night I was at  football camp  my parents were supposed to pick me up on Sunday to go to church, he said. I had a dream that my dad passed away and that Jesus came into the room and he was just knocking on my door saying, Hey you need to find out more about me.

And, so he did and and has since told thousands about his faith. In fact, as the game ended with confetti raining down on the Seahawks, Wilson was one of the first to lead fellow Christians to kneel and pray on the field, giving glory to God.

"I told the guys, 'Why not us?'" Wilson said. "It's only my second year, but I believe in the guys that we had. I believein the coaching staffit's just God is so good. He brought me a really long way. It's unbelievable. It's kind of surreal to be honest with you. Sitting there holding that trophy up and I'm looking up, I'm just so thankful for everything that I've been given.

And Wilson is not the only one on the team who lives a life of faith integrated into a football career.

Clint Gresham, a long snapper, safety Chris Maragos and offensive tackle Russell Okung are also featured, sharing their professional and faith journeys both on and off the field, Hallowell wrote.

Praying for their proverbial enemies, as Jesus said to do, seemed to be further proof of the team's diehard faith.

In an amazing display of faith on Sunday, cameras captured a group of Denver Broncos players huddled with Seattle Seahawks linebacker Mike Morgan for a moment of prayer on the field after the devastating blow.

While football is important to these players, they say something bigger is pulling rank in their lives. A week before the game, Wilson and four other Seahawks came out to famous Seattle mega-church Pastor Mark Driscoll, detailing how much more important Jesus is than football.

"Jesus is love! At the end of the day, we are all looking for someone to comfort us, somebody to be there for us at all times. When we are at the worst times of our lives, when we are battling with something, or struggles, whatever it may be, when we are at our highest point as well, when things are going really well, we want somebody to comfort us and be there for us and to say, 'Well done.' That's Jesus," Wilson told Driscoll.

Wilson has also been actively using social media like Twitter to spread the source of his strength to his 691,000 followers.

On game day, Feb. 2: "But seek first his kingdom and his righteousness, and all these things will be given to you as well. (Matthew 6:33 NIV)"

And today: #BVD Be kind and compassionate to one another, forgiving each other, just as in Christ God forgave you. (Ephesians 4:32 NIV)

So, I guess Davids theory was right. The game was given to the underdogs, the least likely victor, the weaker vessel the prayer warriors.