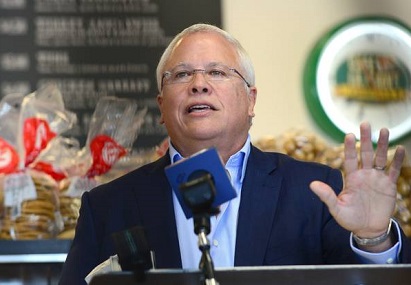 While Donald Trump wends his way to the presidency insulting everyone in his path, Carlos Beruff, son of Cuban refugees seeking the senatorial seat in multicultural Florida, has actually gone on record calling President Barack Obama an animal.

It is disheartening to witness anger and insult as weapons of choice in a disagreement from people aspiring to public service. Gentlemen, you are vying to be a representative of all the people.

Your insults are an example of a limited, corrupt mind, which does not possess the intellect, decorum or civility to elevate your argument, but has to resort to name calling to gain the upper hand.

Criticized by both Republican and Democrat officials Beruff, nevertheless, doubled down and refused to apologize for his indelicate statement.

In case you missed it, there is a certain amount of respect and dignity afforded the office, no matter how you feel about the occupant. He was elected twice by a majority of the people. If so, what does that say about them. Are they lesser animals?

For those of us who have never been ridiculed and scorned, you may think what is the big deal?

Get over it. He did not mean anything by it, one may be inclined to say

That is until it happens to you. One day if you live long enough, you or a member of your family will be the object of disgust. The time is fast approaching when you will no longer be young, wealthy, healthy and handsome. Age will one day steal from us all those lofty attributes and expose us all to belittlement.

Perhaps the day will come when friends and family tired of your rancorous personality will all desert you, and anger and insult will be your only companions. People who indulge in anger and insult are notoriously unreliable and undependable. Today, they may laugh with and support you, but one misstep and you may find yourself on the receiving end of their resentment.

At that time, I am sure you will not find the occasion humorous at all.

Furthermore, it is shocking and dismaying that anger and insult are generated from people who come from a distressed and disadvantaged background. They who have endured the sting of ridicule should know and do better.

Beruffs parents were fleeing persecution in Cuba. Donald Sterling and Bruce Berenson, former NBA owners are Jewish. Light-skinned Blacks who insult dark skinned Blacks are forgetting they are only recently removed from slavery. What about some of the sentiments expressed about immigrants in the book, HOLA AMERICA? However, may I remind you that anger and insult are only effective if they cause a reaction in the offended. They are utilized to cause the victim to shrink away, be diminished, and humbled, and to change his or her course of action.

Therefore, oftentimes, anger and insult are wasted emotions that demean the perpetrator, do not stem the tide of change, and ultimately, end in destruction or death.

Invariably they emanate from a sense of fear.  Your power, culture, influence and way of life slipping away, you resort to anger, insult and revenge to stay relevant and remain a part of the conversation.

The South, defeated, debased and discouraged, gave rise to the creation of the Ku Klux Klan and Jim Crow laws. Read again about the acrimony, spite, hostility and malevolence demonstrated during school integration, desegregation, busing and voter registrations. In addition, they have a way of backfiring, returning to bite the instigator in the butt, resulting in shame, embarrassment and bitterness.

Does anyone remember Mel Gibson and Paula Deen?

Secondly, it is a despicable way to achieve victory, highlighting a perceived shortcoming in a human being. Kindness, gentleness, empathy and consideration are still the best vehicles in which to move ahead. Everyone has flaws and we all stand in need of compassion and mercy.

As of this writing, President Obamas approval rating is at 52%. Moreover, he has not deemed it necessary to respond  to Mr. Beruffs words or any other harsh, insensitive comments leveled at him or his family. This, in effect, leaves Mr. Beruff looking like a fool, similar to the ones he is seeking to replace in Washington. With the majority of people disagreeing with you, you descend into bitterness.  So, to justify yourself and prove your rightness, you refuse to back down and demonstrate a perverse willingness to burn the house up and go down in flames.

You retreat into the fort of, I am just speaking my mind and thats the way I am.

Or the default defense, I have heard many times when the statement is ill-received or falls flat, Hey, I was just joking.

The Jamaicans have an answer for that, what is joke to you is death to me.

All of this to avoid saying, I was wrong, I will display more maturity and choose my words more carefully the next time.

People are forgiving and understand everyone slips up from time to time. It takes a real man to admit he was wrong and he made a mistake. Uncontrolled anger and reckless insults, serve no useful purpose, are extremely limited and ineffective, do not elevate the human race, and are viewed with contempt and horror through the lens of time.

They result in irrational, illogical, aberrant and abhorrent behavior.

Indeed it leaves the descendants of those who engage in such acts with a guilt complex when they review the history of the deeds their ancestors have committed.

Dear Nigger, one letter read. Everybody loved Babe Ruth. You will be the most hated man in America if you break his career home run record.

Dear Super Spook. First of all, I dont care for the color of s&%t You are pretty damn repugnant trying to break Babe Ruths record. You boogies will think that you invented baseball or something.

Think about the withering, scalding insults heaped upon Jackie Robinson by the manager of the Philadelphia, Phillies: Chapman mentioned everything from thick lips to the supposedly extra-thick Negro skull, which he said restricted brain growth to almost animal level compared to white folk. He listed the repulsive sores and disease he said Robbies teammates would become infected with if they touched the towels or the combs he used.

What was the crime?

What was the heinous offense?

What then can cause such repulsive attacks, such detestable phrases, such outpouring of overwhelming rage?

They had the gall and audacity to play a game, mind you, called baseball and dared to be good at it. They were doing what they were paid for and expected to do.

You may be tempted to say, Forget it. Thats all in the past.

Fast forward to 2016 and the pushback against the Old Navy Ads which display an interracial couple and child.

Miscegenation is a disgrace and you are promoting race mixing. If you do not refrain from doing so, I will not set foot in an Old Navy store again, said one patron.

This brings up an interesting point.

The Delaney sisters, accomplished black women who wrote the book Having Our Say, stated they were not in favor of affirmative action.

However, they said, they understood the motive behind the legislation, as some white people would never give a Black person a chance or consider him or her worthy of certain positions. There is a firsthand account in the book of how a college professor intentionally gave Bessie Delaney a failing grade on an exam in Dental School. She was endeavoring to step beyond accepted boundaries.

Akin to an animal, it is unthinkable and reprehensible that he or she should occupy a particular post. Is it any wonder that white people are tired of hearing about racial discrimination and segregation? Is it surprising that a lot of older blacks are suspicious of and nervous and skittish around white people? Who would want to remember that either your parents were the villains or victims in such horrific incidents? Such memories are too painful to recall.

Yet, some people never get over how you made them feel.

What did Mr. Beruff imply when he said it more than once?

Only he and God know for sure.

Whats the big deal you say?

All men were created in the image of God, animals do not have souls and the Bible says, Do not speak evil against one another, brothers, -  James 4:11.

Why dont you pose that same question to your Creator on judgement day?