Just Thinking: It all Depends  Situational Ethics in America Politics
May 25, 2018  By V. Knowles

Hurt me always, if you must, with the truth, but never ever comfort me with a lie. 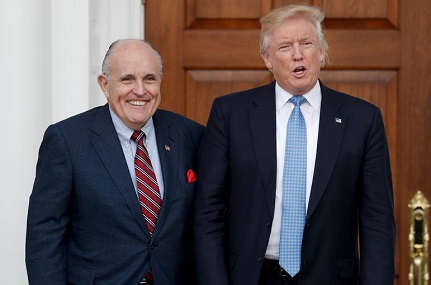 Someone once asked a young lady if she would have sex with a poor stranger for $1? With a look of disgust upon her face and an indignant tone in her voice, she angrily responded, I can't believe you. What do you think I am, a prostitute?

Subsequently she was asked, "Would you have sex with a stranger for a million dollars? The quick response was, "Yes, I'd think about it."

Timing and conditions, not ethics nor principles, my friend, can sometimes make all the difference.

Some years ago in church pulpits and radio programs all over America, one could hear almost daily, the lament about the disease of "situational ethics" afflicting the nation, especially the so-called liberals, people renowned to possess "elastic morals"--an assumed stark contrast to the conservative, morally rigid religious sect.

However, this affliction has been around for centuries, infecting all races, religions and cultures and is not restricted by geographical or political boundaries. These are people without firm ethical moorings who lack a fixed moral compass--who are blown by, and swayed by, and flow in the direction of the prevailing wind.

Situational ethics is a belief system that whatever feels right, convenient and good at the time, is right and good for you. There are no moral absolutes, no mountain you are willing to die upon--no proverbial steadfast line in the sand you will not cross.

Since the election of a man known to engage in truthful hyperbole, we once again are witnessing its damaging effects.

A prime example of situational ethics is the double-minded former mayor of New York, Rudy Giuliani, in his defense of Donald Trump.

We dont have to. Hes the president of the United States, Giuliani told host George Stephanopoulos. We can assert the same privileges other presidents have.

But 20 years ago, when Bill Clinton was in the White House, Giuliani took the exact opposite view. In a July 21, 1998 interview with Charlie Rose, he was asked about whether the president would have to testify before Independent Counsel Kenneth Starrs grand jury if subpoenaed.

You gotta do it. Im mean you dont have a choice, Giuliani, a former U.S. Attorney for the Southern District of New York opined.

The pastors were in an uproar back then, over a nation that was on the way to hell in a handbasket.

I remember with dismay and disappointment the 90s when Bill Clinton was president.

While rumors swirled around him, which unfortunately turned out to be true, despite his passionate denials, his supporters explained, private behavior should have no bearing on public policy." The economy was doing very well at that time.

Another glaring example is the man who said, "it is the greatest privilege of my life to serve as vice president to a president who is keeping his word to the American people" --the ever shifting positions of a chameleon like "born again Christian" Vice President Mike Pence.

So is it OK for a president to lie and cheat?

According to Pastor Robert Jeffress of Dallas, Tx, it all depends.

This is what Jeffress said some years ago.

The danger in all of this discussion is that Christians sometimes are willing to sacrifice the temporal for the eternal, that in order to get their candidate elected, to enact those laws that they feel are crucial, somehow we fool ourselves into thinking we are going to bring about the kingdom of God here on Earth. We are not going to do that. Im not willing to trade peoples eternal destiny for some temporary change in the law.

A far cry from his statement today.

Evangelicals know they are not compromising their beliefs in order to support this great president, he said.

With visions of Herpes and HIV dancing in her mind, caused by the unprotected sexual actions of an adulterous, unfaithful spouse, would it be ok for Donald to tell Melania that she should take one on the chin for the team because, according to Pastor Jeffress, his dalliances are totally irrelevant, due to his policies and strong leadership?

People can overflow with generous impulses, can be so compassionate, objective and understanding when he or she has no skin in the game.

I wonder how Mrs. Jeffress would react if Pastor Jeffress offered such a reasoned logical response after a moral lapse?

As a test I asked my wife if she would take into account the big picture, if ever I strayed. You can imagine how that went over.

Do you remember how these same people castigated Hillary Clinton for "standing by her man?"

So what do we call this patently obvious change of attitude---situational ethics?

How do you respond to the next guy when he rebuffs your invitation with,"I don't go to church, there are too many hypocritical pastors occupying the pulpits."

Indeed, a truly ethical person maintains the same fixed position regardless of the political or cultural climate.

How does a genuine Christian square his changing positions with Mal. 3:6, "For I am the Lord, I change not."

As children of light whose job it is to persuade a skeptical world by our straightforward, straight arrow lifestyle to set out on the path of the "strait and narrow," how do we convince them to, follow us as we follow Jesus?"

As light-bearers we are called to convince by our lifestyle, not by our words, the sinner lost in darkness.

This is an excerpt from the Charlotte Observer about Franklin Graham. This should give pause to any Christian whose desire is to win the lost for Christ.

"Donald Trump said he could shoot someone on Fifth Avenue and not lose any support. It was, and remains, the most insulting thing anyone has said about Trump voters because it means they have no principles, no core. It didn't bother them that he said that about them.

I didnt know then that Trump was referring to the Rev. Franklin Graham, who has become a parody of himself."

Someone who no longer attends church calls Christianity as practiced in America, "a moral cesspool." (ostensibly full of $#%&)

As you observe a man who obfuscates, deflects, distracts, denies and defends reprehensible behavior, a man acquainted and closely associated with grifters like Michael Cohen, it is disheartening to note such Christian leaders like Jeffress, Tony Perkins, Jerry Falwell Jr .and Franklin Graham, who claims God appointed Donald Trump to office, so staunchly support this president with such straight faces.

How can they not wince and squirm in their seats when the hymn is heard, "we have an anchor that keeps the soul, steadfast and sure while the billows roll, fastened to the rock which cannot move, anchored firm and deep in the Savior's love?"

In our post-modern, post-truth society, it seems that the rules have all been changed.

It all depends on whom and when you ask the question.

Visitor Comments (1)
Attention! Attention!! Attention!!!Loan Offer
Posted By ABAB31153 on June 2, 2018
Do You Seek Funds To Pay Off Credits and Debts? { FIFOCapitals@gmail.com } Is Here To Put A Stop To Your Financial Problems. We Offer All Kinds Of Loan (Personal Loan, Commercial Loan, etc.) We Give Out Loan With An Interest Rate Of 1.00%. Interested Applicants Should Contact Us Via Email: FIFOCapitals@gmail.com