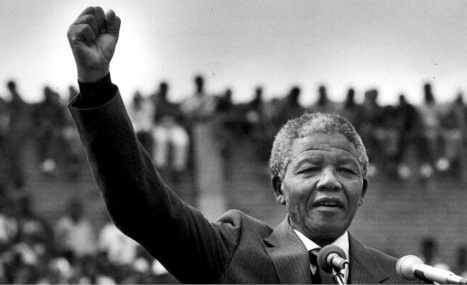 He said: I love you, LORD, my strength. The LORD is my solid rock, my fortress, my rescuer. My God is my rock I take refuge in him! Hes my shield, my salvations strength, my place of safety.  Because he is praiseworthy, I cried out to the LORD, and I was saved from my enemies. Deaths cords were wrapped around me; rivers of wickedness terrified me. The cords of the grave surrounded me; deaths traps held me tight.  In my distress I cried out to the LORD; I called to my God for help. God heard my voice from his temple; I called to him for help, and my call reached his ears.

With the disgraceful performance in Helsinki as a backdrop, one that approaches treason, one where leadership was sorely lacking, perhaps we need to review the great leaders of the past to remind us what we were, what we could be and what we should be. May God help us all, if we do learn from their mistakes.

Case in point. Nelson Mandela, whose birthday is today, and we remember him for languishing in a Robben Island prison for 27 years then getting out to run his country of South Africa.

There is a common thread that runs through the characters of all great men and women.

These are the individuals we tend to cherish and remember throughout history. Individuals whose lives blessed us during their so brief a time on this sometimes unforgiving and unkind earth.

Not a day that goes by when we do not quote one of their words, yearn for someone like them or to become like them.

With profound humility and keenly aware of their inadequacies, they recognized their human limitations, gnawing uncertainties and doubts about their positions in the pantheon of influential movers and shakers, and their beneficial impact upon the human experience.

Fear of failure, or persistent worry about being ineffective were their constant companions.

Indeed, whenever God met with them to persuade them to move out on the road to greatness, His first words would be,"Fear not."

Overwhelmed with such an awesome responsibility, Moses lashed out at God and complained, "Did I conceive all these people? Did I give them birth? Why do you tell me to carry them in my arms, as a nurse carries an infant, to the land you promised on oath to their ancestors?

Unfamiliar with the burden of such a tremendous task, he had to be chided by Jethro, his father in law for doing so much that he would eventually wear himself out.

He never made it to the Promised Land.

Job and Jeremiah both moaned and asked, 'why did I come into the this world to suffer?" Cursed be the day in which I was born! Let the day not be blessed in which my mother bore me! Let the man be cursed who brought news to my father, saying, A male child has been born to you!

Hear Job. "For my sighing comes before I eat, and my groanings pour out like water. For the thing I greatly feared has come upon me, and what I dreaded has happened to me. I am not at ease, nor am I quiet; I have no rest, for trouble comes."

Note a deeply distressed Jeremiah. "O Lord, you induced me, and I was persuaded; you are stronger than I, and have prevailed. I am in derision daily; everyone mocks me, for when I spoke, I cried violence and plunder! Because the word of God was made to me a derision daily. Then I said, I will not make mention of him, nor speak any more in His name."

Elijah, cowering in a cave, far from the reach of ruthless Jezebel, cried, "Lord they have slain all the prophets and I alone am left."

Ironically, this was the same courageous, confident Elijah who had called down fire from Heaven and slain all the prophets of Baal upon the mountain top.

Unconvinced even by the Almighty the prophet would not rise up out of his malaise. So the dejected, discouraged exhausted man was instructed to anoint his successor Elisha. Subsequently he was taken home on a fiery chariot.

John the Baptist, languishing alone in Herod's prison, his confidence and bravado apparently badly shaken , sent his disciples to inquire of Jesus, "are you the one whose forthcoming was foretold or should we expect another?"

He lost his head at the behest of Herod's wife. She was presented the severed head on a platter-- a final public humiliation.

This was the same person whom Jesus had called the greatest man to come from a woman's womb.

Oskar Schindler is the only member of the infamous Nazi Party buried in Mount Zion Catholic Cemetery, in Jerusalem, Israel.

The bane of his later years and singular regret was perhaps, during the Holocaust, he could have saved just one more Jew, one more of his "children" if he had expended greater effort.

Mother Teresa, who struggled for years in India, while viewing such unrelenting misery, doubted if God even existed.

Inscribed on a wall in a room of her home:

People are often unreasonable, irrational, and self-centered. Forgive them anyway.

If you are kind, people may accuse you of selfish, ulterior motives. Be kind anyway.

If you are successful, you will win some unfaithful friends and some genuine enemies. Succeed anyway.

What you spend years creating, others could destroy overnight. Create anyway.

If you find serenity and happiness, some may be jealous. Be happy anyway.

The good you do today, will often be forgotten. Do good anyway.

Give the best you have, and it will never be enough. Give your best anyway.

She died in the slums of Calcutta.

Here are some sobering questions and thoughts.

Do we acknowledge our weaknesses and shortcomings?

Are we aware that we do not know everything and can do everything?

Do we realize we need help to get from here to there?

Am I tempted to take credit for my abilities and deeds? Do I feel a need to vindicate myself? When we understand our inherent dependence on God, we are far less likely to boast in our accomplishments or to retaliate in the face of opposition.

Such a contrast in our leaders of today--not a hint of a Nicodemus or an Ezekiel in their demeanor. Proud, boastful, self-proclaimed experts on everything, they speak loftily, an arrogant, self-assured tone in their voices, with phrases loaded only with superlatives like the greatest, largest, healthiest, smartest and the best.

As we hear the refrain at every junction, on every corner, falling from every lip, "Make America great again."

Perhaps we can learn some lessons from those "points of light" of the past --those fallible, flawed, unsure men and women who have gone before.

Get easy access to secure a genuine online funds services at an interest rate of 3%.

Apply for the following Loan.

We are certified, trustworthy,reliable, efficient, Fast and dynamic. I also give out loans from the range of $5,000USD- $5,000,000USD at a 3% interest rate. Duration of 1- 15 years depending on the amount you need as loan. If you are interested please contact us for more information.
Richard.D Ford
WhatsApp: 1 404 400 4210
danielfordllc@gmail.com
Post A Comment
Related Articles · More Articles