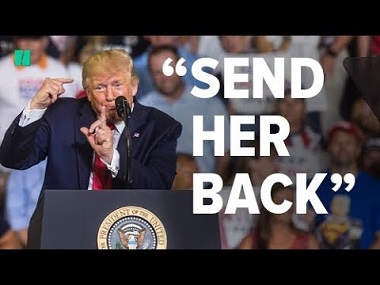 As I watch the disgraceful display of xenophobia in todays media landscape, especially after the shouts of "Send her back" hurled at Minnesota Congresswoman Ilhan Omar at a North Carolina rally for Trump, my mind reflects upon statements that I have heard minorities say about the mainly white audience.

"White man speaks with a forked tongue, mouthing words with no iron."

"The white man made over a hundred treaties with the red man and broke every one."

"They are shameless in their hypocrisy, always finding words to explain away their misdeeds, using any means including the Bible, to maintain any advantage and exploit their victims. They will adjust their standards and voice their outrage to suit the immediate situation."

While this character flaw may be attributed to any human being, it is the white typical evangelical Trump supporter like Steve King of Iowa who continually trumps the claim that they are the only moral, spiritual, ethical and intellectual force with the superior capacity to save a dying, failing nation.

Many attendees in the audience that night were Christians who decry the liberal Democrats and were appalled at the moral failures of Bill Clinton. They were forceful in their condemnation of his flawed character, complaining that no one with such loose ethics should serve in the oval office. They are so convinced of the rightness of Trump's cause, so assured of his appropriateness for this time, that they are willing to overlook any deficiency and explain away or excuse any act, no matter how appalling.

They refer to it as the lesser of two evils. They silence their barking consciences with references to David and Cyrus and statements like, "we knew he was no choir boy when elected, but everyone deserves a mulligan."

They are willing to sell their souls and sacrifice their sacred honor and ethics to clap back at the demonic Democrats who encourage homosexuality, support the scourge of abortion and allow the brown hordes to

It is interesting to watch this schizophrenic display of Christianity--living demonstration of the lesson of the speck in the eye of your brother while ignoring the log in your own.

Now with the above as a background, I ask you as a Christian reader of any race -- how do you reconcile the foregoing with the following?

Belonging to each other is the central theme in Christianity. Jesus Christ prayed to his father that we would be one even as He is one with the Father. We are supposed to esteem others better than ourselves.

Here is what the church is doing in the Netherlands - over 800 hours of worship, and counting.

A Dutch church has enlisted the support of volunteers to hold a non-stop service since late October to protect an Armenian family who fled political persecution in their home country.

In Exodus, the children of Israel were mandated to be kind to strangers as they were once foreigners in Egypt.

One of the seven deadly sins mentioned in Proverbs 6 is,"a mouth that breatheth lies and sows discord among the bretheren."

Jesus went out of his way to reach out to the Samaritan woman at the well at a time when the Jews had no dealings with the Samaritans.

Furthermore, he explained to the smart aleck young Jewish lawyer that a neighbor could be anybody who demonstrates mercy and compassion, not necessarily those of your own kind.

To really be an ethical follower of Jesus, one needs to adhere as closely as possible to his teachings, otherwise you can be accused of being "lovers of pleasure more than lovers of God, having a form of godliness but denying its power."

Here is what he said, "the second is like unto it, thou shalt love thy neighbor as thyself."

One final thought, when Mary and Joseph fled to Egypt to avoid Herod's wrath, she, I am sure, did not have a visa or proper documentation.

What if the Egyptians had decided to shout, "Send her back."

Hmmm, I wonder how would that have worked out?