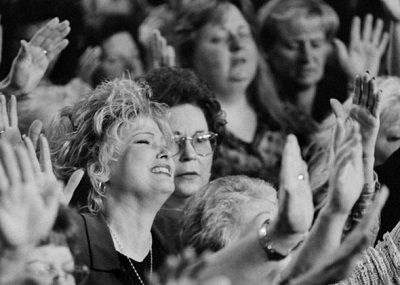 Something pernicious and ominous is coursing through a portion of the Christian movement in Americayet through the white Evangelical church in America, in particular.

As a boy in the islands of the Bahamas, I grew up Anglican. Yet, when I moved to the U.S., I had my first genuine encounter with Jesus. It was under the auspices of a Pentecostal church helmed by a husband and wife duo who were former missionaries in the Caribbean. And, yes, they were white.

They led me in the sinners prayer and I began my new journey as an Evangelical Christian in America.

I have never been at loggerheads with any segment of my religious community. But, today, I am unable to stand alongside some its membersand, yes, they are among the white Evangelical segment.

What you will read below is witchcraft, supposed angels of light using passages of scripture to twist our arms to agree to condone, overlook and support immoral behavior. Some even go so far as to suggest that anyone who does not support Mr. Trump is not a real Christian.

It is a base political calculation disguised under the veneer of spirituality to make it more palatable and acceptable.

It has been referred to by Tony Mulligan of the Family Research Council, as being given a "mulligan, a do-over in gulf.

On the surface it appears in keeping with the traditional thought and concept of forgiveness for past transgressions, but I am unable to see it that way  due, in large part, to my thorough indoctrination in Evangelical theology, specifically of the Pentecostal persuasion.

Dallas megachurch pastor Robert Jeffress, an adviser to the president, defended Donald Trump's reportedly calling Haiti, El Salvador and some African nations as "sh*thole countries," saying the president got the "sentiment" correct and that Trump was "right on target.

Not much of a conversation seasoned with grace seems to be the stance with this guy.

As an immigrant myself and Christian missions minister, I am unable reconcile this point of view.

What about being kind to strangers and not oppressing the foreigner? Or does that only apply to a select few-- a direct contradiction to Jesus's final commandment of going into all the world and preaching the gospel to every creature. It seems those from sh*t hole countries are just sh*t out of luck.

Evangelicals knew they werent voting for an altar boy when they voted for Donald Trump, he said. We supported him because of his policies and his strong leadership.

Thus, when it comes to those behaviors, he suggested theres pretty much nothing Trump can do to alienate him as long as he delivers on those policies.

Not a big believer in, "Have nothing to do with the fruitless deeds of darkness, but rather expose them. It is shameful to even mention what the disobedient do in secret." - Ephesians 5:11

Lying, fornication and adultery apparently are no biggies with this guy. If you are against the wrong kind of sins  abortion, homosexuality, welfare dependency - then you are OK with Him and he has assurances from God about that.

In addition, as Trump has said he is believer, an alleged whoremonger, how do you handle this Bible verse, not to eat with such a one, God will judge those on the outside, expel that wicked person from among you.  - 1 Cor. 5: 11-13

Again, I was schooled well to be heavy-handed in judgment on these sins at all of the thousands of Evangelical church services Ive attended.

Daniels, the adult film star, was reportedly paid $130,000 just before the 2016 election to keep silent about an alleged 2006 affair with Trump. Now, she is suing the president, claiming the agreement is invalid because he never signed it.

Representatives of Trump have denied the affair, as has Daniels via a written statement. 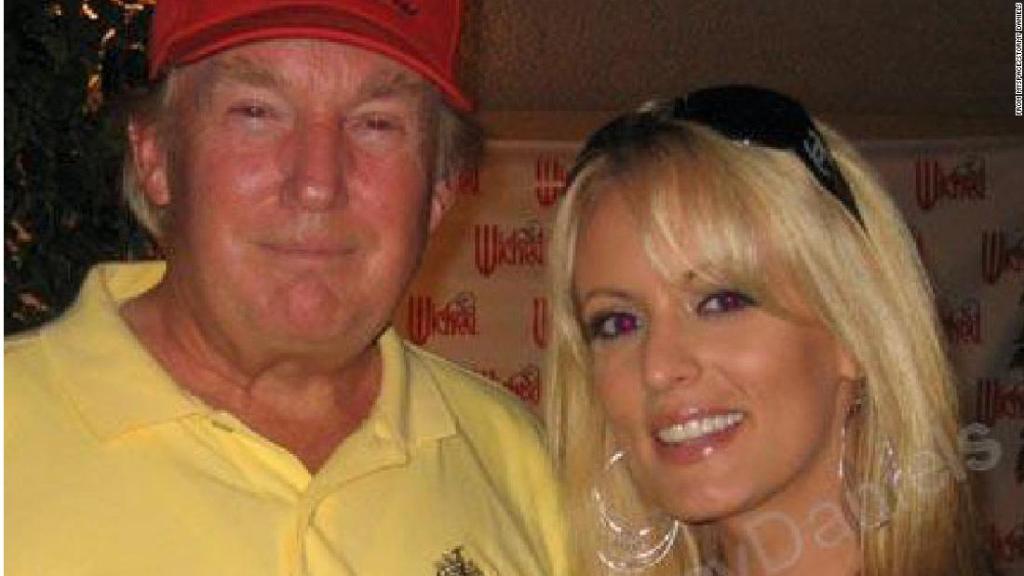 Jeffress, who has been a guest in the Trump White House, has had a history of inflammatory comments. All of which I cannot support.

Last year, he said NFL players who kneel to protest racial injustice should be thanking God they havent been shot in the head. (Wow, no empathy here, plus total disregard for the commandment, thou shalt not kill and to pray for those who oppose you.)

Jeffress, also a Fox News contributor, has suggested that if you dont support Donald Trump, you cant be a real Christian.

That attitude is why the church in America is not growing. We are failing in our primary mission of lovingly ushering people in the kingdom--people do not need to be reminded how bad they are but how good God is, and why it is wise and beneficial to become like Him, and follow His ways.

Feeling unwelcome in their desperate state, they will not come to hear and understand that sin is a bad idea for all people, and the way to obtain salvation and deliverance from their sins.

Trump, himself, has been referred to as a baby Christian by James Dobson of Focus on the Family. Pastor Paula White declares that Trump has come to a confession of faith, but he is a work in progress.

Again that is a reasonable assumption, because we are all growing in grace to a perfect man.

Just in case you have forgotten or never knew it in the first place, here, in a nutshell, is the definition of a Christian. A Christian is a person who has trusted in and received the atoning blood work of Jesus on the cross for his salvation. He has confessed, his sins, repented from his past sins and asked God to lead him not into temptation again.

After the initial step, he begins a journey to become like Christ so that he can live with him forevermore in heaven.

Yet, since he is a captive in his mortal flesh, living in a fallen world, he may make mistakes along the way. It is not a list of dos and donts, but an attitude of the heart which always entertains a desire to return to a righteous path, when he or she misses his way and messes up.

We know this because Jesus himself says,"if you love me, keep my commandments" in John 14:15. Furthermore, he says in Matt. 7:16-20, by your fruits you shall know them.

He goes on to say, let your light so shine before men that they may see your good works and glorify your father which is in heaven.

At this juncture, I can hear the people shouting, by grace are ye saved through faith and not of works. That is true but the man who penned those verses also instructed in Ephesians 2: 10, "For we are his workmanship, created in Christ Jesus for good works, which God prepared beforehand that we should walk in them."

God forbid that he called us out of darkness into his marvelous light so that we can continue sinning. 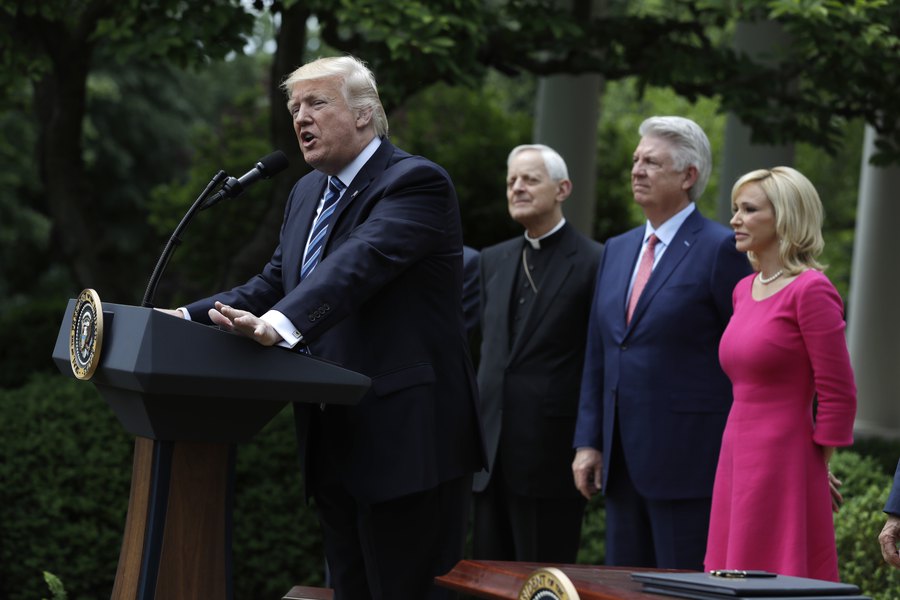 That, my friends, is cheap grace, taking the amazing grace of God for granted and putting to shame, by our behavior, the name of Christ before a skeptical world.

Then, that would mean, all that becomes necessary to become a Christian is to mouth a few words in church and continue with business as usual.

This was not what I learned in my 40+ year journey as an Evangelical. In fact, I learned that being a leader means you are held by a much higher standard.

When Christ saved the woman caught in adultery, he warned her, "Go and sin no more" for the wages of sin is death. I think He wanted her to know that sin is a dangerous pursuit and he may not be around the next time to intervene.

Paula White, James Dobson, Tony Perkins, Franklin Graham, Jerry Falwell, Jr have made a political transaction with a thrice-married, adulterous man, because he supports their position on homosexuality, abortion and immigration---not the only sins in the Bible, I hasten to remind all of us.

There is nothing spiritual in that and using the Bible to undergird that decision is "DISGRACEFUL."

The hypocrisy is grotesque. Do you think that if a Democrat were accused of the same thing, there would be such compassionate, generous outpouring of forgiveness and understanding?

We are now witnessing salvation and redemption contingent on your political affiliation and its agenda.

As I have said previously, voting Democrat or Republican does not make you more or less a Christian. God does not condemn you to hell because you make the wrong political choice.

Trump is not your Savior, Robert Jeffress is not your judge and neither has been given the authority to declare you a Christian or not.

We are all sinners saved by grace and fallen short of the ideal of God.

If you err, you have an advocate in Jesus Christ who is ever ready to forgive you of your sins and cleanse you from all unrighteousness.

However, to accomplish that you must ask, repent and turn back to the path that leads to God.

True repentance is turning away from sinful behavior and turning to God who, in turn, will help you to shun sinful behavior so that you appear to the world, as recreated in the image and likeness of our Savior. Subsequently, the old things will pass away and everything will become new.

I will let you decide if you think any or all of the foregoing applies to President Donald Trump and those mentioned herein.

Visitor Comments (0)
Be the first to post a comment!
Post A Comment
Related Articles · More Articles
New Rule: Immigrants can receive healthcare and aid without risking green card eligibility
The public charge rule that rendered immigrants inadmissible or ineligible for green cards if they accept government assistance was overturned in September and new rule, allowing immigrants to receive food stamps, healthcare services and other government aid, took effect December 23, 2022.
The Sound of Christmas movie with Ne-Yo, strong remake
This Christmas, R&B singer-writer-producer Ne-Yo, stars in the BET+ original holiday remake of The Sound of Music" directed by Booker Mattison.
Trumps Sad Farewell to all his Greatness
Trump is like an aging boxer well past his prime, who does not know when to quit. Yet, which political stands in the wings? I think we all know.
Back To Archives